BUT I DON'T WANT TO BE A PIRATE RACCOON-CATCHER

I'm a little prejudiced when it comes to the wildlife that wanders into our backyard.  I'm fond of foxes and frogs.  I can put up with possums.  But I'd rather not have any raccoons—even if the French word for raccoon (raton laveur, meaning young rat bather) is adorable.

In the past, raccoons had been a nuisance.  About twenty years ago, a family of raccoons made a habit of raiding the garbage can every night, which prompted my husband to secure the bin with a bungee cord.  Since then, these masked raiders have not returned—until recently.

Not long ago, a raccoon was lounging in the top of a neighbor's tree.  In broad daylight.  Raccoons are supposed to be nocturnal so, there's no telling what this critter was up to.  It might have been looking for food, but these creatures usually feed at night on nuts, seeds, fruits, eggs, insects, frogs, crayfish—oh, and sometimes tuna.  How do I know?

A few weeks ago, an enormous tomcat appeared in our neighborhood and terrorized my sweet stray cat Putt-Putt.  He attacked Putty twice in our yard.  One time, I was able to break up the fight.  The other time, I arrived too late—evidence of Putty's white fur lined the driveway.  So, in effort to keep Putt-Putt safe, I contacted the Humane Society.  An animal trapper by the name of Sarah suggested that I catch the troublesome cat and have him neutered.  She assured me the cat would become less aggressive.  So, I met Sarah and borrowed two steel traps.

She instructed me to fill two trays with tuna, one for each trap, and then set the traps outside at dusk.  When evening rolled around, I placed one steel cage near the deck and the other in the backyard under a fir tree.  I checked every half hour, but by bedtime, the tuna was untouched and the cages remained empty.  This was discouraging.  I had given up hope of catching Putty's tormenter.

The next day around 6:30 in the morning, I stepped out back to survey the cages, still feeling doubtful that an animal had been trapped.  But low and behold, the tomcat was in the cage by the deck.  And judging by the growling and the scowl on his face, he was not too pleased.

I figured the other trap would be empty.  As I tramped through the dewy grass to the fir tree, I approached the cage.  The tuna had been eaten.  And staring right at me was what seemed to be a strange-looking cat with a mask.  It took me a few seconds to realize that I had trapped a raccoon.  The memorable line about a puffy shirt from a Jerry Seinfeld episode immediately popped into my head, "But I don't want to be a pirate"   https://www.youtube.com/watch?v=0mPIqVOBFis  but in this case it was more like:  But I don't want to be a raccoon-catcher.

When I called Sarah with the Humane Society, I told her of my luck.  She made plans to pick up the cat in a few hours, have him neutered the next day, and then re-released into our neighborhood the following day.  Sarah explained that feral cats need to come back to their neighborhoods because they have a homing instinct and if they are placed elsewhere, they would die.  She assured me that after his operation, he would be less of a menace.

"And the raccoon?" I asked.

"You'll have to release him yourself," said Sarah.

I hadn't bargained for this.  All I wanted to do was keep Putty safe.  And now I had to find a way to release a raccoon and keep myself safe.  Lifting the locks and having my fingers close to an unhappy raccoon was not going to happen.

There had to be a way to release this critter without both of us getting hurt.  I had time to think on this.  Since I needed to pick up weekly groceries, I figured perhaps my Kroger peeps could help me figure this out.  They were thoroughly entertained with my predicament—but they offered no sound advice.

I returned home an hour later with bags of groceries but without any new ideas on freeing a raccoon.  It was worrisome and distractive.  I needed to edit picture book manuscripts, update my website, and work on marketing my book.  But I couldn't concentrate.  I went out back to check on our backyard guest.

When I approached the trap, the area looked like a battle had raged.  The cage had moved ninety degrees.  The back part of the cage was filled with mulch and dirt.  The towel I had placed on top to keep the creature calm was torn to shreds.  To my surprise, the raccoon had vanished.  It had managed to slide open the ring locks and let itself out.

You might think that after this episode my dislike for raccoons has grown, but actually, my heart has softened.

Raccoons are kind of cute, that is, from a distance.

They have an IQ higher than that of cats—which I learned while googling how to release a trapped raccoon.

And raccoons are blessed with nimble fingers and puzzle-solving skills (thank goodness)...because this writer would still be wondering and worrying how to release a tuna-loving raton laveur.

Feel free to leave a comment at: Rlmrvos@gmail.com
Comments:
I love your blog… interesting subjects and thoughts. Shelley D.
I enjoyed catching up with you on your blog post.  Nancy B.

I love reading your blogs. Virginia B.

We are successful when we fall in love with our work. #writingforchildren #writingcommunity pic.twitter.com/hZrkDCKrHu

Hi! I'm Randi, an author and the editor of Kid's Imagination Train e-zine. I love my daughter and husband, my cat Ozzie, Putt-Putt the stray cat we take care of, dancing ballet and speaking French. Parlez-vous français?

Putt-Putt, the little beggar that we love 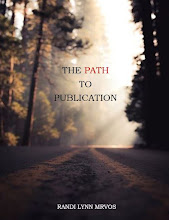 FREE! Fill out form to receive your copy of THE PATH TO PUBLICATION