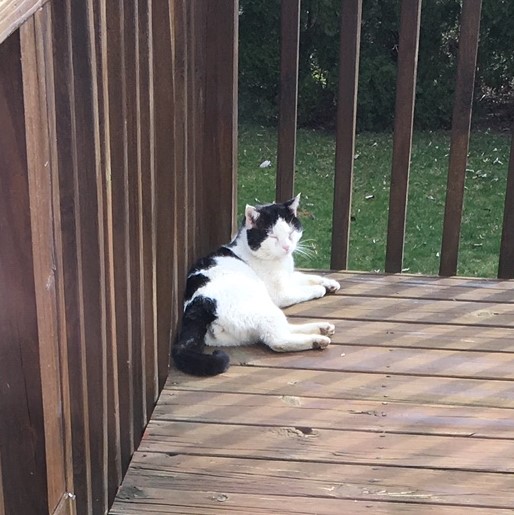 When I take breaks from marketing, blogging, writing articles, and editing manuscripts, I'm on the lookout for Putty; and if he is waiting by the deck door, I'll feed him a dish of cat food.  I've known this adorable stray for almost seven years.  By the grey in the black spots of his coat, he's probably twelve-years old or older.  Many years ago when he first wandered into our backyard, he was skittish.  Over time, he learned to trust me and would come to me when I called him.

Putty used to sit on the deck next to our first cat Ollie (separated by a screen door).  They were buds.  On the day we had to put Ollie down, Putty stayed on the deck.  It was as if he could sense he would never see Ollie again.  Losing my first pet was devastating.  I've never owned a cat before, and seeing him get sick and waste away killed me.  When Ollie was gone, the house seemed so quiet, so cat-less.  Putty still came around even after we buried Ollie.

Confession # 2:  I swore I'd never get another cat.

Three months later, we adopted Ozzie.  I wasn't sure how Ozzie would react to Putty.  But since Ozzie's territory is inside and Putty's is outside, they get along swell as long as they are separated by the screen door.  Putty loves to lounge on our his deck.

Mornings at the Mrvos household are fairly routine.  I feed Ozzie and then if Putty is on the deck, I set out food for him, well before I toast my bagel or have a sip of coffee.  My furry friends come first.  But one morning when Putty was enjoying his breakfast, a large orange tomcat sneaked up and tackled him.  The yowling was awful.  Luckily, I was able to chase the intruder away, but it looked like he may have harmed Putty.

After the fight, tufts of Putty's white fur stuck to the deck.  Miraculously, there wasn't a trace of blood.  Putty leaped off the deck and lingered nearby on our neighbor's driveway, frozen and stunned.  I wanted to reassure him that everything would be okay.

But Putty didn't come when I called him.  He ran away.  I couldn't blame him.  He comes to our house because he'll find shelter (a shady patio when it's hot and a heated cathouse when it's cold), food around the clock, and love (he lets me rub his coat and pat his head).

For weeks after the attack, Ozzie still waited at the screen door for his buddy to come back.  He seemed more hopeful than me, though any time I was in the kitchen, I'd peer out onto the deck expecting to see my little stray press his sweet face against the glass door.

And then one day Putty came back.  Like nothing had happened.  Maybe... 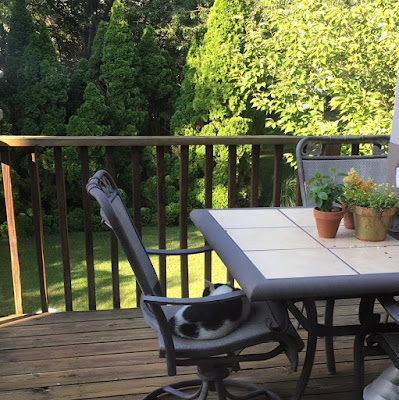 1. he forgot about being attacked
2. he was hungry
3. he missed me

If you guessed #2, you are correct.

Confession #4:  I fed other strays.

Leaving cat food on the deck was not smart.  It was an invitation for other strays to dine at the Mrvs'.  And this included the orange tomcat.  Though at the time he started to lurk around the deck, I didn't have the slightly clue he would be so aggressive.  Since this big cat only stopped by at night, I never dreamed he'd come around at daylight.  Wrong.  A stray will come a begging any time of the day or night. Lesson learned.

Now, I set out food only when Putty is present.  I watch over him while he eats to make sure no other cat sneaks up on him.  I resist feeding the other strays.  Though seeing them wander through our yard makes me feel sad, but I can't take the chance of one hurting Putty.

Now that's it's warmer, we placed our furniture on the deck and Putty comes by more often.  He sleeps on one of the chairs.  That makes me feel better, too, because he has a better chance of spotting a cat that may wander to the deck.

I could never turn Putty away or be mean to him.  He's so cute, plus life has got to be tough for him.  He's susceptible to scrapes, scratches, and sores.  And he must deal with all kinds of weather conditions, find shelter and food, and fend off vicious feral cats.  So, that is why there will always be a special place in my heart for Putty.  I confess, he's like a second pet.

And that means in the morning he will have a dish of food (premium wet cat food just like Ozzie) even seconds, well before my first sip of coffee.