Let’s say that you’re sporting a new haircut, or that you’re driving a new car.  Chances are you’d want someone to notice.  You’d want someone to acknowledge you.  Deep inside, you’d like a compliment.
﻿ ﻿
Yet compliments are rare.  Allow me to travel back in time when I was a medical technologist.  I worked with about thirty employees in the Clinical Chemistry Laboratory at the University of Kentucky Medical Center.  We worked Monday through Friday (with two days off a month) and every third weekend.  We were expected to fill in on any shift.  We operated and maintained sophisticated instrumentation.  We analyzed blood and other body fluids (differentiating between normal and critical results), and reported the results to doctors and nurses.  Needless to say, we didn’t get a pat on the back.  Such a shame. My co-workers were amazingly talented individuals.  Were doctors, nurses and managers too busy to notice?
While it would be insincere to give employees compliments every day, an occasional “You did a nice job” would be a good thing to hear.  To repeat the over-used phrase, it’s a “win-win situation.”  Giving a sincere compliment makes the employee feel appreciated.  Employers who give compliments know it encourages and motivates employees.  It’s such a simple thing to do and it doesn’t cost anything.  Employees in any work place deserve them.
So what’s this got to do with writing?  Let me pose another question.  How often to do compliment an author for an article that you enjoyed?  How often to you acknowledge a writer for winning an award or achieving an exceptional goal?  I challenge you to do so.  Call them on the phone, post a message on Facebook, or send them an email.  You could send a card or a small gift.  We are so caught up in our everyday lives that we forget that as writers, we need to connect with other writers.  We are part of the community.  So put yourself aside for five minutes and think about someone else.  Pay a compliment to a friend, a family member, or a co-worker.  It will brighten their day and you too, will feel good knowing that you’ve made a positive impact on someone else. You say you’ll consider it?  Then, good job.  Nicely done.  Bravo!  My heartiest congratulations go out to you!
Posted by Randi at Monday, February 28, 2011 2 comments: 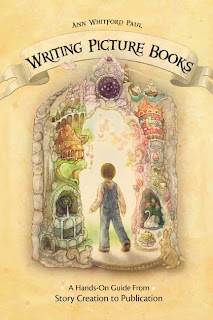 Writing Picture Books
by Ann Whitford Paul
Writers Digest Books   256 pp.
6/09     Print  ISBN-10:  1582975566      ISBN-13: 978-1582975566
I thought I knew everything about creating a picture book, until I discovered Ann Whitford Paul’s book, Writing Picture Books.  After reading Paul’s book, I discovered more ways to make my picture book more successful.
She lays it on the line and emphasizes that writing picture books is not easy.  And she’s right.  A picture book author has to write a book that adults will want to read and that children will want to hear over and over and do so using very few words.  Paul’s book discusses topics like character development, strong openings, the poetry of prose, endings, and much more.  She provides a mix of hand-on exercises and instruction to help writers create great picture books that will appeal to editors and agents, as well as children and parents.
One of my favorite parts of the book was a layout of pages of a picture book to illustrate the importance of page turns.  When I applied this technique to my picture books, I discovered that my page turns needed a little tweaking.  With so many how-to-write books on the market, I recommend that you move this book to the top of your list.  It’s an enjoyable read and perfect for those driven to create picture books for kids.
Posted by Randi at Monday, February 14, 2011 2 comments:

Nobody is Gonna Rain on My Parade

Recently, a person published a rather mean-hearted article about my blog.  Crushed, I conferred with my sister (who also has a blog), my husband (who told me to “let it roll off my back”), and my blog teachers (who informed me that I’ve encountered my first troll). It was hard not to take it personally, because he complained that my blog was self-serving. And in some ways it is.  But if he had read any of the entries, he would have seen that 90% of my blog is written to help other writers.
People blog for all kinds of reasons.  Some people create blogs to read like diaries, while others promote themselves and their work.  Blogs can educate, or entertain, or start debates.  It’s a personal choice.  For me, I started with the concept of wanting to share the journey (the triumphs and the disappointments) of trying to get a picture book published.  The blog branched out into reviewing and promoting other authors’ books, offering inspiration for writers, and providing insight into an editor’s world.
My troll believes that blogs aren’t creative.  I would encourage him to spend a few minutes researching popular blogs.  He would be surprised to find that many are wildly creative and written by witty people.  He also thinks that blogs are a waste of time.  I agree blogging takes time; however, successful bloggers manage to make time to fit blogging into their writing schedule.  It doesn’t have to be a time-consuming process.
While attending a lecture by Alice Pope, former editor of Children’s Writer’s and Illustrator’s Market, I learned that people should consider developing a platform to sell their books.  Some publishers are willing to lend a hand with publicity, but in many cases, an author must do most of the promoting.  Social networking and blogging have the potential to reach a vast audience.  For this reason and for personal reasons I will continue to blog, regardless of the negative comments. As for my troll, I think he should toy around with blogging while he tries to find someone to publish his book.  He may just have a change of heart.  He may realize that blogging could be beneficial.  And when he does so, I only hope no one rains on his parade.
Posted by Randi at Monday, February 07, 2011 No comments: