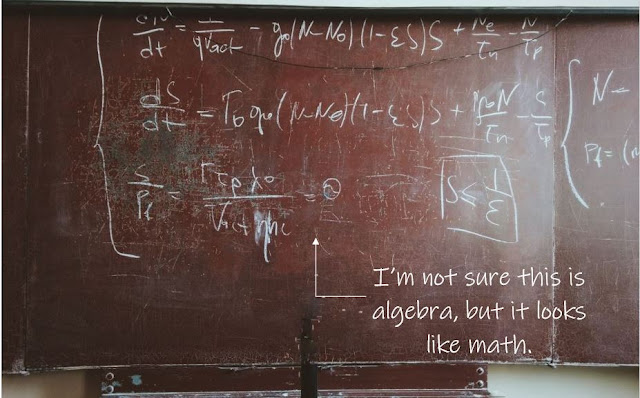 THE BEAUTY OF HINDSIGHT


Math has never been and will never be my strong suit.  But when I was fourteen, you might have thought math was my best subject.

At the end of 8th grade I took a placement test and scored high enough to take advanced algebra.

When my freshman year began at Jeffersontown High School in Louisville, Kentucky, I was proud to be part of Ms. Leslie's advanced class.  But after a few lessons, I realized this was not the right place for me.  I was in over my head.  Equations looked like a foreign language to me.  A blurry foreign language.  Vanity called and I gave up wearing my glasses—there were so many cute boys in class.

Ms. Leslie intimidated me.  No, let me rephrase that.  She scared the hell out of me.  She never smiled.  She was firm.  She was totally all business.

I wanted to do well in class, but the book was impossible to follow and there was no way to approach a teacher who frightened me.  Looking back, if I had been braver and asked for help, I would have probably made fewer Ds in algebra.

Ah, the beauty of hindsight.

Since then, my math skills have not improved that much.  I have a habit of overestimating.

I overestimate when packing for a trip and bring

I overestimate when cooking for a family gathering (20 pieces of chicken for five people, right?)

I overestimate when I should arrive for an event (an hour is not too early, is it?)

Sometimes, I underestimate.  When Jim and I got married, we held the ceremony and reception at a Spindletop Hall, a historic mansion in Lexington.  The ceremony took place in the library.  A very small library.  The room only held 200 people.  We invited 210 people.  We counted on five couples declining.

I have a habit of overestimating more than underestimating, like the time I had my first book signing.  Two hundred invitations were sent to family and friends.  Of course, not everyone could attend.  There was a nice turnout, but true to form, I overestimated how many books would sell.

And then there was a school visit.  I was scheduled to give nine classroom visits over two days.  The teachers gave me a head count of 225 students.

I thought half of the students might like to buy Maggie.  Roughly 112 books.  Then, I thought that's being too optimistic.  It seemed reasonable to order two cases of books.  Each case has 25 books.  Surely, I could sell this quantity.

That said, I still have quite a few more copies.  I would love to sell them.  Each and every one of them.

How many do I have?

Read it. Enjoyed it. I don't know what that stuff is on the chalkboard, but I think it's way beyond algebra!  M. Cook