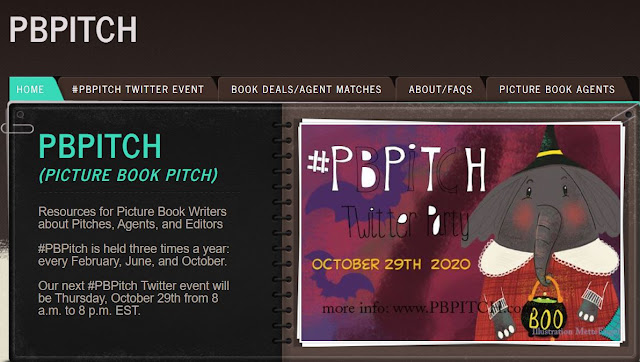 TO PB PITCH OR NOT TO PB PITCH, THAT IS THE QUESTION

I'd often wondered if it would be worthwhile to participate in #PBPitch, an online session where writers can pitch manuscripts to agents and editors.  All that's needed is a Twitter account and a polished manuscript to join in.

Being curious, I decided to pitch three manuscripts in the 2020 October event.  What I found was it's necessary to allow time to work on pitches days well before the event.  I needed to create at least two different pitches per manuscript because writers were not allowed to use the exact wording twice.  Each had to be unique and compelling.  In addition, the pitches needed to be short.  Agents and editors would not have time to read big blocks of text even though Twitter allows a 280-character count.

There would be a lot of writers taking part in the event.  So, I was eager to learn the best approaches to pitching.  Here's what I found out from writers who have had success:

I felt a roller coaster ride of emotions during the Twitter Pitch event:  excited, hopeful, giddy as well as nervous, disillusioned, and defeated.  Afterwards, I wondered why put myself through this mixture of joy and agony.  All writers that participated were dying to have their pitches liked by an agent.  And yet during the last session (and I'm talking 12 hours) I only saw a handful pitches that received hearts.

Is Twitter pitching worth it?  That's a tough question.  Pitch events are a great way to interact with agents, to support the writing community, and to fine-tune the hook for query letters.  On the down side, a pitch event is time-consuming, can be physically exhausting (my eyes were killing me after reading and commenting on pitches) and it may leave you feeling discouraged.

There are those who say you should never stop taking risks.  Writers have found representation through pitching.  But I'm on the fence about it.  Part of me even wonders if any agents actually saw my pitches.  It's easy to get lost in the feed.  You however, may feel up to the challenge.   So, do some research.  Weigh the pros and cons.  And if you're curious, go for it.  Only you can determine if #PBPitch is right for you.