Here is a sneak peak of Maggie.  I am honored to be working with Creative Director Melissa Carrigee and illustrator Emiliano Billai.


Maggie and the Summer Vacation Show and Tell will be available this summer at Cactus Moon Publishing, Amazon, and other online retailers. 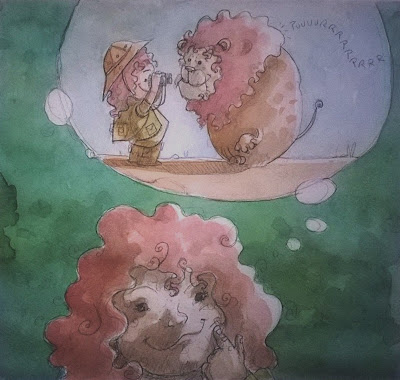 Thank you to my husband and daughter
and friends and writers for their wholehearted support.

When I write for children, most of my stories feature an animal as the main character. My characters are based on the four-legged creatures that I've read about or the animals that I've known and love.  In my upcoming children's book Maggie and the Summer Vacation Show and Tell one of the main characters is a dog called Trooper.

Trooper is based on a lovable dog called Charlie (check out his adorable picture to the right).  Charlie belongs to a good friend of mine. His coat is warm brown and and eyes full of expression that say "come give me a hug." On our first meeting, Charlie gave me with lots of wet kisses.  With his big loving personality I knew he'd make a perfect character for one of my stories.

The other character in the book is a little girl named Maggie.  Unlike Trooper, Maggie is purely invented.  She popped into my head (more like barged in) when I began to write the story about Trooper.  Maggie is a kind of Charlie Brown-like character, a woe is me, down on her luck kind of kid.  Every time I sat down to write, her voice was loud and clear.  It wasn't long before Maggie told me she wanted to be Trooper's owner.

In my book, these two characters interact naturally which is pretty cool given that one character is based on something real and the other character is invented.  Both characters have a problem. One problem has a good chance of being resolved, the other situation cannot be resolved.

Yet despite the problems, there's this chemistry, a real devotion between the two that brings magic to the story.  So, you may have surmised that one of the themes of the story is love.

Now that you know a little about the characters, I invite you to meet Trooper and Maggie this summer.  You will be able to see how their personalities play off one another in a story that is sad, funny, and joyous.