I don't wear hats.  Even if it's the fashionable thing to do.

May 4th is Derby Day.  Like most Kentuckians, I will watch the Run for the Roses on television.  For those who attend the Derby, it's customary to wear hats at Churchill Downs.  Hats come in all shapes and colors, may include ribbons, feathers and flowers and are often larger than the heads they top.  Some are downright outrageous.  For instance, take those worn by commentator Johnny Weir.  The ice-skating legend has worn a hat made of roses in the shape of a horse head, a white and gold crown adorned with a three-foot pink braid down his back, and for the 2018 Derby, a three-crowned headpiece (to symbolize the Triple Crown:  Kentucky Derby, the Belmont, and the Preakness).

When I attended the 100th running of the KY Derby however, I didn't wear a hat.  It never occurred to me to wear one because it just wasn't fashionable to get dressed up when you watched from the infield.  Though hatless and far from the grandstands, I was treated to a most memorable Derby.  That year, there were two unique attendees:  a streaker who climbed a flagpole (who didn't wear a hat) and the Queen of England (I'm sure she wore a hat.)


I don't wear hats.  Even if it's the sensible thing to do.

I should have worn one in 1976, when I attended a FUR-EEZING cold Ohio State football game.  The blustering wind whipped through the stadium nonstop and gave me an awful earache.  But even if I had brought a hat, I'm not sure I would have worn it—God forbid I should have flat hair.  As French novelist George Sand once said, "Vanity is the quicksand of reason."

I should have worn one a couple of years ago during a graduation ceremony which was held outside on a sunny, cloudless spring day.  If I had found a cute hat to match my dress, not only would I have been stylish, I would have felt much cooler and been better protected from the sun.  But seriously, would I have worn it and risked having flat hair?

By now, you know the answer.

It seemed likely that I would have to wear a hat for the 2018 U.S. Tennis Open held in New York City.  The temperatures were predicted to be in the nineties all week long.  Luckily, the day for which we had purchased tickets was overcast and in the mid-seventies.  The hat I had purchased stayed in the suitcase.

I don't wear hats.  Even if it's glamourous.

Hats have been worn by actresses, wives of presidents (like Jackie Kennedy and Melania Trump), and British royalty.  When these celebrities wear hats, they look stylish, elegant, and graceful.

Though I could never carry off wearing a hat as these women have, one famous hat-wearing author inspires me to consider it.

Many years ago, my daughter was into the movie The Princess Diaries, based on the book written by Meg Cabot.  When we found out that she was coming to Lexington for a book signing, we had to meet her.  On the day of the signing the place was packed with parents and kids.  Granted, Cabot was wildly popular, but I wondered if one of the reasons she drew a huge crowd was because she wore a sparkly tiara.  Technically, a tiara is a jeweled crown, not a hat.  Still, that got me thinking...maybe I should wear a hat on my head to draw a crowd when I do a book signing.

Who am I fooling? 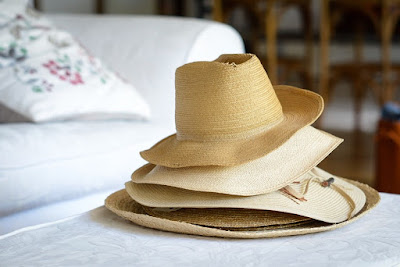 I'm thinking:  a straw hat.  If the crown is big enough, my hair wouldn't get smushed.

I could glue seashells, postcards, and tiny plastic poison dart frogs (some of the souvenirs in my book Maggie and the Summer Vacation Show-and-Tell) to the brim.

It would be kind of crazy.  Cute.  Eye-catching.

Maybe not as wild as what Johnny Weir would wear, or as fashionable as a Jackie Kennedy pillbox hat, but doable.

But maybe I should.

It's something worth thinking about.

Flat hair and vanity aside, wearing a hat could be just what this author needs.