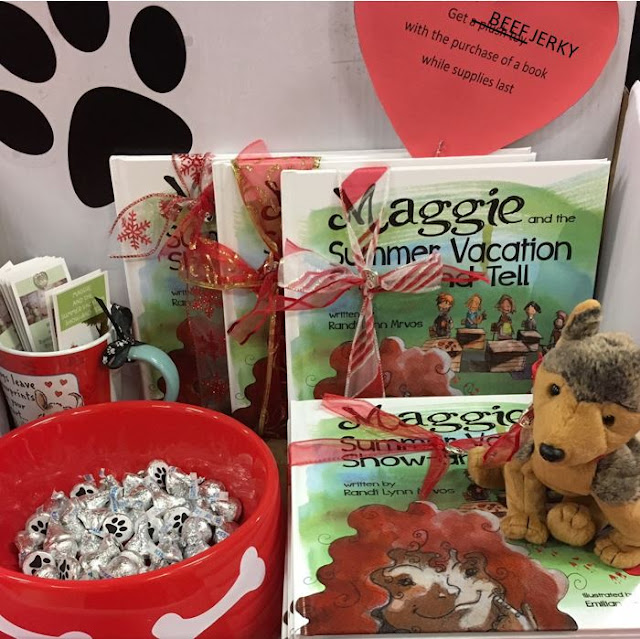 I could have sold more copies of Maggie at a holiday craft fair...but I sat next to Beef Jerky Man.

Last year at the fair, I shared a table with Peggy Park, author of Grandmother's Journal.  At first, we were nervous.  Our table was in a room off the beaten path of the main lobby.  We figured the foot traffic wouldn't be as good and that people wouldn't find the smaller room.  But, we were pleasantly surprised.  People visited the lobby and then wandered into our room to buy jewelry, candles, holiday crafts, handbags, and paintings.  Peggy and I were the only book sellers and since we did quite well with sales, we decided to share a table again for this year.

But this year...oh my goodness.  Our table was next to K. C., a man who sold homemade beef jerky.

Beef jerky is a dried meat snack.  It is made by marinating beef in a curing solution and drying it. Meat treated in this fashion has unique flavor and a long shelf life.  Native Americans smoke-dried meat to preserve it and are credited for the invention of this meat-processing technique.

Beef jerky is advertised as a nutritious product which is low in cholesterol and high in protein.  It was used during World War I as a source of protein for soldiers.  Astronauts travel with beef jerky.  It is a 2.5 billion-dollar-industry in the United States.

I wasn't sure about the quality of K.C.'s beef jerky.  But, I do know he sold an assortment of flavors:  peppery, spicy, teriyaki, scorpion (hot chili pepper) to name a few and that people flocked to his table.  I could tell in the opening minutes of the fair that we were doomed.  I could feel it in the air.  Peggy and I could not compete (not that this was a competition, mind you) with beef jerky.

K.C. had a simple table.  Four white baskets filled with plastic bags of jerky.  Nothing fancy.  On the other hand, our table was bright and cheery.  Welcoming.  We had a bright red tablecloth.  We had books wrapped in Christmas ribbons.  We had adorable plush puppies and Hershey's kisses.  Still, we were no match.  People never even saw our table.  They walked right past, hypnotized by the lure of beef jerky.  I'm not kidding—people waved money in the air as they approached K. C.'s table.

When the fair was over late afternoon, K.C. counted his money.  He meticulously laid it out on top of his table in four stacks.  With that much money, he probably figured it made sense to separate it into denominations of ones, fives, tens, and twenties, but I'm sure he had no clue how it looked to other vendors.  Sitting next to him made me feel uncomfortable and a little jealous.  I'm sure he wasn't trying to be boastful of his earnings, but he could have used more discretion.

Even at closing, crowds continued to flock to his table.  I wanted to get the courage to ask them to come over, pick up a book, and see the value in buying one.  Peggy's book is a wonderful way for grandparents to share their memories.  And picture books entertain kids while teaching them vocabulary and life lessons.

I wanted to tell people a book is a gift you can open again and again.  A book could last a lifetime.

It was useless.  Beef Jerky Man had a product that people craved.  A good friend of mine tells me that he buys beef jerky because it tastes great and it stays fresh for a long time.  That opinion seemed to be shared at the fair.  People were going gaga over beef jerky.  I never would have believed how popular it was if I hadn't seen it with my own eyes.